Top 10 locations in Greece, where the profit from daily rent grew the mostProfit from short-term rentals in Greece over the past two years has grown stronger in locations less popular with tourists - analysts of AirDNA, a service that processes ads published…

Coworking - a growing trend in the office marketThe concept of coworking (from the English. Co-working - collaboration) is simple, but very functional: the interested party (employee) on a rental basis offers a comfortable and fully equipped workplace.…

Rental business in Germany: what does an investor need to know before buying?The German real estate market is one of the most stable in the world. Today it’s a seller’s market: there are fewer facilities here than investors who want to buy…

Small, but comfortable: modern technology expands the space of small-sizedIt has long been no secret that in the real estate markets of many large cities there is an objective shortage of residential space. The increase in the density of…

Top 5 techno-hubs in the world: a paradise for IT people and real estate investors 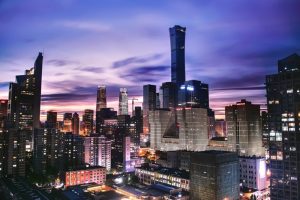 American analytical portal Expert Market has published a list of cities that are considered the best for the life and work of specialists in the field of IT. Analysts of the portal analyzed the average level of income, the amount of funding available for local startups, and the cost of living in different cities of the world. Tranio experts studied the top five techno-hubs in the world according to Expert Market to find out how the concentration of IT-specialists per square meter affects its cost?

Beijing
Beijing topped the list of the best cities for the life and work of IT specialists, although a year ago it was not even among the top ten. In Beijing, there are 56 companies from the Fortune 500 list, which includes the largest organizations in terms of revenue in the world, the head offices of the manufacturer of Xiaomi smartphones and Google Google, Baidu.

According to analysts from Expert Market, startups in Beijing get better opportunities for funding compared to other techno hubs.
According to analysts from Expert Market, in Beijing, start-ups get better financing opportunities compared to other tech-hubs zhang kaiyv / Unsplash
According to official statistics, wages in the IT sector in China are almost two times higher than in other areas. The average income of IT-specialists in Beijing, according to one of the world’s largest job search portals Glassdoor, is 25 thousand dollars a year. At the same time, the cost of living in the Chinese capital is low: on the Numbeo service, which collects data on prices in different countries, the city ranks 277th among 439 cities.

$ 0.9 thousand
The cost of renting a one-room apartment in the city center (per month)

$ 14,8 thousand / m²
The cost of buying a one-bedroom apartment in the city center

According to the National Bureau of Statistics for 2016, the cost per square meter in Beijing is almost four times higher than the average in China. In 2013, the difference was less: real estate in the capital was worth three times more than the national average. The rise in property prices in Beijing is largely related to general economic indicators: since 2010, the population of Beijing has grown by 4–5% annually, the average income of the population is growing, and urban GDP in 2016 surpassed the 2011 figure by one and a half times.

Berlin
Berlin ranked second in the Expert Market ranking. The city is called the “European Silicon Valley”: more than 500 startups a year are opening here. According to the information service of the Berlin Business Location Center, in 2018 1.07 billion euros were invested in startups in Berlin, 40% of which came from abroad.

In 2016, Expert Market analysts called Berlin the best place for the work and life of IT specialists
In 2016, Expert Market analysts named Berlin the best place to work and live IT specialists Stefan Widua / Unsplash
The city offers excellent conditions for start-up companies: the cost of living in Germany is generally lower than in Europe, and renting and buying a home is much cheaper than in other major German cities: Munich, Frankfurt or Dusseldorf.

Berlin is one of the most active real estate markets in Germany. Cheap mortgages and the influx of population stimulate a rise in housing prices: the city is growing by 50 thousand people a year, with a total of 3.6 million. Largely due to young professionals from abroad, today almost one fifth of Berlin’s population are foreigners.

IT specialists in San Francisco receive the highest salary compared to other techno-hubs, but also spend more than others: with an average salary of 137 thousand dollars, according to the Glassdoor for December 2018, life in Silicon Valley costs an average of 110 thousand USD per year – more expensive than anywhere else in the US, analysts of the financial portal Go Banking Rate concluded.

$ 3.4 thousand
The cost of renting a one-room apartment in the city center (per month)

$ 12,5 thousand / m²
The cost of buying a one-bedroom apartment in the city center

San Francisco is facing a crisis in the affordable housing sector. According to the City Planning Department, less than a third of real estate built since 1990 is accessible to people with low or middle income.

Austin
Analysts at Expert Market identified Austin in fourth place in the ranking, and CNBC journalists in 2016 called it the best place to start a business in the United States.